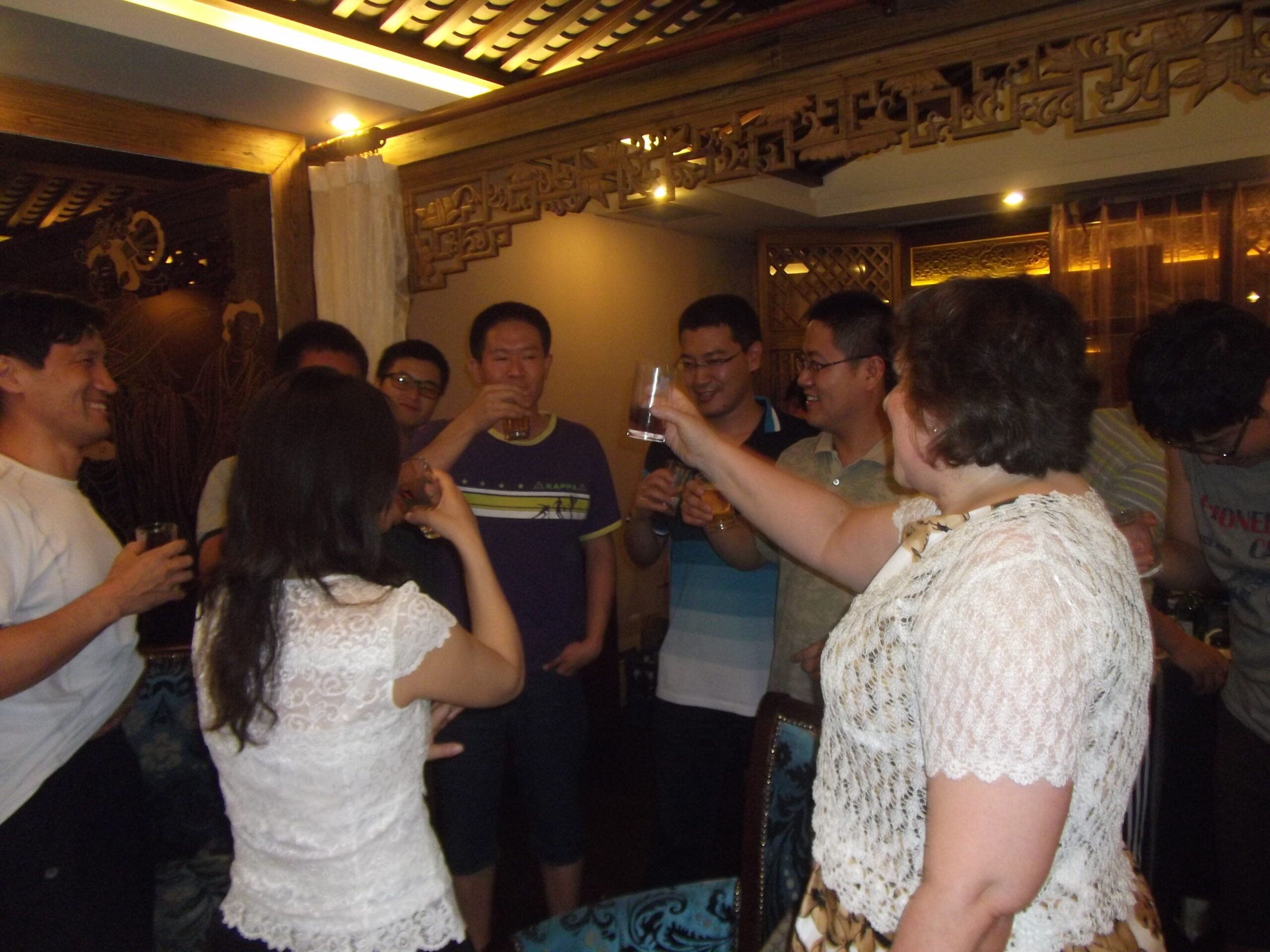 Well after a very stressful day with the exams and it was nothing to do with the students but a “little” technical hitch from the service provider (which I cannot tell you about under pain of death) all students came out of the exam rooms happy. All 28 of them. Half an hour later (I have never showered, dressed and put on make -up so quick in my life) we were off for a celebratory dinner paid for and organised by the MD of training company. We walked. We walked out of the beautiful complex into the dirty filthy streets of Beijing. 15 minutes later we arrived in the most stunning shopping centre and rode the escalators up to the 5th floor. Rhys and one of his students took longer than us because they decided to check the fire extinguishers in one of the shops. That really was taking H&S too far and they are both very sad indeed.

I was very happy as I had a lovely man escort me to dinner. He was one of Rhys’ students and I had not had much contact with him until 2 days before hand when we combined both the classes for a day on “occ health”. Occupational health is Rhys’ speciality and is what he does on a daily basis. It’s very complicated and I struggle with it at the best of times. This was a win-win situation for me because I could learn from an expert, have someone else run my class and still get paid. Result! The only section that Rhys does not like to deliver is “stress” which is the last topic of the day which I then delivered. Anyway this man was sitting right in the front and he got the brunt of my humour, ribbing and good natured teasing. He was also one of the oldest students, somewhere in his forties. I have subsequently worked out that I am the oldest person in China. Everyone else is younger than me.

On the walk to the restaurant, this man (actually his English name is Steven) (but this is not the American one who ate Geoffrey) asked if he could walk with me and proceeded to talk away. His English is excellent and his diction perfect. He spoke with an American accent as he has spent a lot of time there. Hence my happiness.

The restaurant was magnificent. Even though it was on the 5th floor, there was a stream with a bridge that had to be crossed to get into the main part of the restaurant. All round the edge of the restaurant were private dining areas with the main restaurant in the middle. We were taken right to the back where a large room had been set up with 3 round tables with chairs around them. On the floor in the corner were crates of beer and wine. The students were very very happy. The college and hotel in which we all were staying is “dry”. No alcohol allowed at all. And it is strictly monitored. Sinopec Management Institute is a place of learning not boozing. 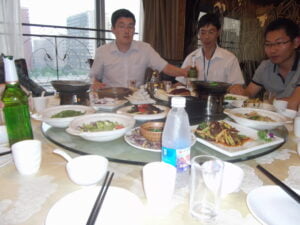 The table had a beautiful glass lazy susan filled with a large variety of dishes. Some were hot and steaming and others were cold or warm. It was all brightly coloured and beautifully presented and not a bowl of rice in sight. There was not one recognisable food on the table. I knew I had problems. Big problems because the MD was sitting right across from me. (This was the bloke that I had my picture taken with on the photo shoot day that doesn’t speak English).  He looked at me and motioned for to start. Besides the unrecognisable food there was another problem. We had plates and chopsticks in front of us but there were no serving spoons. With absolute horror I watched the rest of the table help themselves using their chopsticks. They ate with their chopsticks and helped themselves to the food with the same chopsticks. As the lazy susan moved round the table 10 sets of gob infested chopsticks were contaminating all the food. There was no way it could get worse. 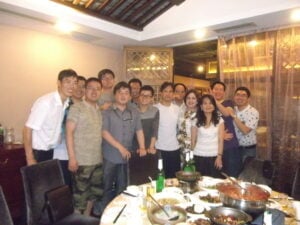 I was offered wine, ”red or white” they asked. “White please” I replied expecting a decent chardonnay. How naïve am I? Spider’s eyes lit up with glee. “Are you sure” he asked. “Yes, of course” I replied indignantly and he started to laugh. Steven whispered in my ear “it’s close on 100% proof”. “Just a drop” I said to Spider and then the toasts started. Mr Wang ( the MD) stood up and said something and we all stood up, clincked our glasses, drank and sat down.  30 seconds later Tom stood up said something, we all stood up, clincked our glasses, drank and sat down. I looked around and all the tables were indulging in this activity. Meanwhile contaminated food was being consumed. Next Spider stood up and the whole scene was repeated. My students on the next table were very merry, and getting very loud. So far I had managed to consume some tofu, sliced potatoes( they were delicious) and a very small quantity of  beef simmering in a pan in front of me. I reckoned that if it was simmering, it might be safe. Very civilised. May, who was sitting on the other side of me was making conversation. “ do you like donkey in England?” What a strange question I thought. “ yes,”I politely answered her,” I know some people who run a donkey sanctuary In Leeds for distressed donkeys.” Then it hit me.  Steven (I hate Steven) could not control his laughter. 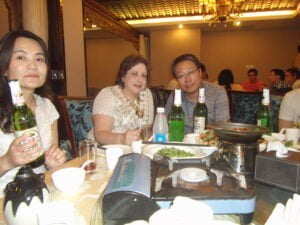